Have you been looking for a Black Mirror inspired comedy with a bit of Suite Life of Zack and Cody nostalgia mixed in? Well, look no further — Amazon’s new original series, Upload, is the show for you. From the mind of Greg Daniels (The Office, Parks and Recreation), Upload manages to distract you with Daniels’ signature humor and snark, while subtly weaving a complex social commentary in the background.

Set in a not so distant future, Upload tells the digital afterlife story of Nathan Brown (Robbie Amell). The show is based on the classic sci-fi trope of maintaining one’s consciousness after physical death. Here, individuals can pay to have their consciousness “uploaded” to any one of a number of digital afterlife settings, the most popular and most expensive of which are created and maintained by the Horizen company.

Following a near-fatal car accident, Nathan is uploaded to Lakeview by Horizen courtesy of his wealthy girlfriend, Ingrid Kannerman (Allegra Edwards). Once uploaded, Nathan is assigned a Horizen’s customer service agent, or Angel. Nathan and his angel, Nora Antony (Andy Allo), begin to develop a friendship as they unravel the mysteries of Nathan’s untimely death and his damaged memories.

No offense to whoever made the Upload trailers, but it’s easy to assume from those short clips that this series would be very much in the vein of Judd Apatow and Seth Rogan humor, with that “male-centric” humor. In these types of comedies,  women tend to get the short-end of the stick through shallow character development and a heavy reliance on the male gaze. Rest assured, the series itself does not fall into those tropes.

Nora is one of the most fleshed out characters and is the easiest to relate to. She dropped out of school to take care of her ailing father (Chris Williams) after her mother passed. Her focus has now become working long and hard enough at Horizen to pay for her father’s upload, if she can ever convince him to agree to the digital afterlife. This struggle of caring for an aging or ill parent is a struggle that many millennials can relate to, especially during our current pandemic. Despite Nora’s IRL problems, she still manages to be caring and dedicated to all of her Horizen charges. Her heart and humor help carry the show through some of the more tragic and darker moments.

Then there’s Ingrid, whose initial superficial blonde socialite persona slowly gets peeled away as we learn more about her and her love for Nathan. Watching her growth from the pilot episode, where she’s portrayed as the ditzy, clingy girlfriend, to the final episode of Season 1, was an unexpected surprise. It’s not often that the “ex-love interest” is someone we come to root for, but by the end, I found myself wanting Ingrid to find happiness (not with Nathan thought, because #Natora, but someone). 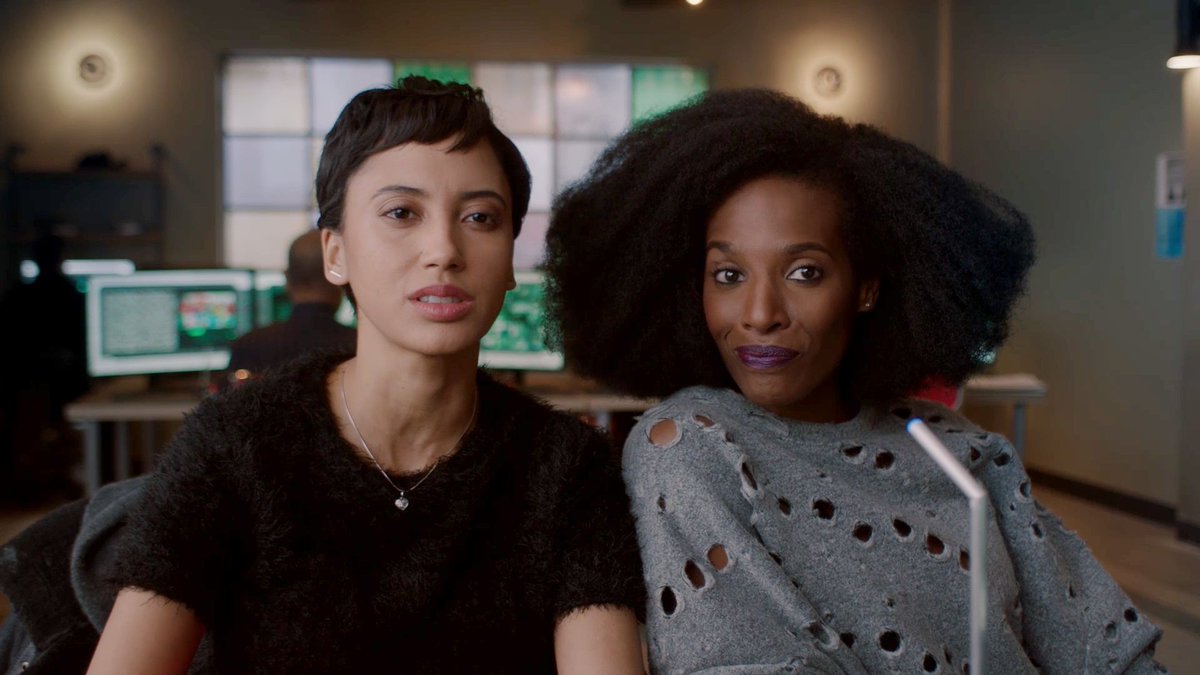 Finally, you have Aleesha (Zainab Johnson), a fellow Angel and Nora’s foil character. Aleesha is brash, sassy, and has literally zero craps left to give. The scenes between her and her charge, Luke (Kevin Bigley), are honestly the funniest on the show.

Putting aside the humor and the character development, the social commentary in this show is absolutely insane. Like looking for all the easter eggs in the latest Star Wars film, trying to catch all the subtle and not-so-subtle references to our current society and politics is nearly impossible. Not to mention the outright commentary on current issues — like Nora’s dad’s terminal Vape-Lung condition or Nathan telling his biracial niece, Nevaeh (Chole Coleman) not to let Ingrid straighten her natural hair during their sleepover. The show also touches on wealth disparity, the importance of consent, and how people of color often have their names altered by others either for humor or ease of pronunciation.

Upload cleverly uses identifiable brands and company names to suggest rather unique future mergers, like Oscar-Meyer Intel and Panera Bread Facebook. The effect is a feeling of unease for the viewer because it’s never explained why exactly these mergers occurred. Slogans like “pushing the boundaries of meat,” are uncomfortable and unsettling, especially when it precedes a person’s head being blown apart like a squished grape.

My favorite little reference/political nod is the character David Choak (William B. Davis), Nathan’s neighbor at Lakeview. A very obvious reference to the Koch brothers, Choak provides an interesting contrast to other wealthy characters like Ingrid’s father, Oliver Kannerman (Barclay Hope). He’s portrayed almost as contemptible version of Yoda, seemingly having existed longer than anyone as an overseer of society. Choak even tells Nathan that he “influenced American politics for a generation.” He’s also the first one to bring up the idea that Nathan’s untimely death may not have been the accident it appeared to be.

Overall, Upload is a quality series with a balance of humor and mystery. Greg Daniels and his team have found a way to incorporate a Sims-like digital afterlife setting, all the silly hijinks humor we’ve missed from the Suite Life of Zack and Cody, with the social commentary of Black Mirror and classic whodunit mystery elements.

All ten episodes of Upload are streaming now, exclusively on Amazon Prime.

Upload is a quality series with a balance of humor and mystery. Greg Daniels and his team have found a way to incorporate a Sims-like digital afterlife setting, all the silly hijinks humor weâ€™ve missed from the Suite Life of Zack and Cody, with the social commentary of Black Mirror and classic whodunit mystery elements.Â

Gabby Martin is a freelance attorney and Connecticut lobbyist. She’s always up to critique and analyze the MCU, Star Wars, Harry Potter, and historical events. Gabby is not-so-patiently awaiting the introduction of more Latinx representation in pop culture. In her free time, she mentors law students by sharing the good, the bad and the ugly about the law school experience. Follow her ramblings about all things pop culture and social justice on Twitter at @GabbytheEsq.

Ni no Kuni: Cross Worlds Launches May 25 on Mobile with Cross-Play on PC

Ooblets is Coming to Nintendo Switch and Hits 1.0 This Summer

Carolyn Talks ‘Not to Forget’ with Filmmaker Valerio Zanoli